Valentine's Day dawned and with it, Lilah's surgery.﻿  The O.R. was actually running ahead of schedule due to some last minute cancellations. so we were in and out of the hospital in under two hours, from start to finish.  Lilah was a rockstar.  By which I mean she raised a little hell and took no prisoners.
I learned that I'm not the only one who thinks Lilah is insanely strong for her size- it took three of us to hold her arms just so that they could put numbing cream on her hands where they would later insert the IV catheter.  More than one nurse commented on her freakish strength.
﻿
﻿Though the procedure was extremely quick and simple, it had to be done under general anesthetic, which I was pretty apprehensive about.  No matter how simple the procedure, and how grateful I was to be there for such a short time, there were a few things that were surprising and emotionally exhausting about the day.  For starters, holding your child while she thrashes about and fights the gas mask before eventually going limp in your arms is exactly as disconcerting as it sounds.  Then there's the scale of things.  Lilah has always been big for her age.  Every check-up, she measures out around the 95th percentile for height and the 75th for weight.  But seeing her in her little hospital gown on the humongous operating room table and later, on the hospital gurney, she just looked so tiny.  Miniscule, actually.  And lastly, though we had been warned that there might be a small amount of discharge from the eye, it still made my stomach drop when she cried blood-tinged tears later in the day.

But it wasn't long until she was back to desecrating books with a red crayon (it was Valentine's Day afterall): 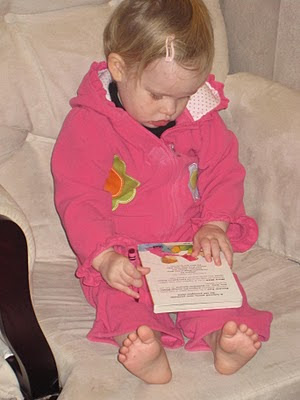 I truly appreciated the well wishes we received.  Even for something so minor, it's really nice to know who's got your back.  There were a few words of wisdom in particular that  warmed my heart, so I just had to share:

Melodrama suggests a disproportionate reaction. You're just being a great mum- true this surgery is routine, but not for you and your crew. Be kind to yourself. Pack some chocolate for the waiting room.

(I think I may have taken that last suggestion a little too seriously.  What?  People offered heartfelt advice.  Is was my duty to follow it to the letter.  Note to self: will need to log in some extra cardio hours this week.)


I am also reading "Vanishing Acts" by Jodi Picoult.  An overarching theme of all her novels is motherhood, and this particular quote spoke to me in this week:

When you're pregnant, you an think of nthing but having your own body to yourself again; yet aferiving birth you realize tha the biggest part of you is now somehow external, subject to all sors of dangers and disappearance, so you spend th rest of your life trying to figure out how to keep her close enough for comfort.

Okay, that's it for the hand-wringing and "woe-is-me"-ing.  I promise.  It's safe to say Lilah recovered much more quickly from the ordeal than her mommy and daddy did.  And so far, the eye looks great.  If it's stays clear over the next couple of weeks, we can go ahead and assume it won't cause her any more trouble.  A relief, to say the least!
Posted by Amanda at 9:43 PM