Wednesday of Few Words: How to Relax

1.  Fill your belly.
2.  Find somewhere warm. The mantel above the fireplace will do nicely.
3.  Channel your inner cat. The Pics of Christmas Past

Whoa, Monday, how did you get here again so soon? Well you know what that means! It's once again time for Monday Listicles hosted by none other than the Listmaster herself, Stasha.  This week our instructions were a little more vague than usual - we were simply asked to provide a list of ten pictures.

So, with Christmas less than a month away (don't hate me for saying that - I haven't started my Christmas decorating/shopping/meal-planning/package-sending yet either!) I thought I would treat you to some pictures dredged up from my Christmas archives.  C'mon, it'll be fun, and it will help us all get in the Christmas spirit!

1.  Okay, so this one is cheating just a tad.  I can't guarantee this photo was taken at Christmastime.  But it's one of my favourites of me as a kid, and it was definitely winter, so humour me, okay?  That pout is pure two-year-old (I'm quite familiar with the sight of it on Lilah's face these days), so I'm going to hazard a guess that this was taken in 1981. 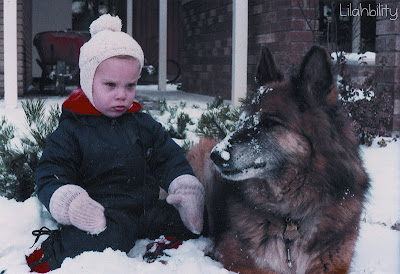 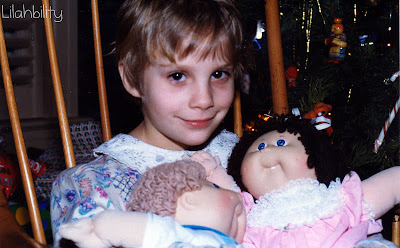 3. Roughly 1984 or '85. Still rocking the same haircut.  No idea what is hanging around my neck in this picture, but it looks like a school project, and I look very pleased with myself. 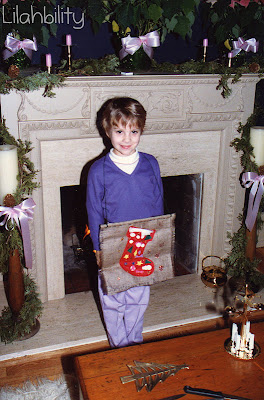 4.  Me in a school Christmas play, circa 1988 or so.  Why didn't anyone tell me to tuck in the white t-shirt?  It's kind of ruining the whole pink vibe I've got going on.  And, because I know someone will ask, I can't tell you anything about that other kid except that I have a vague feeling his name was Jamie and he was the blue elf to my pink. 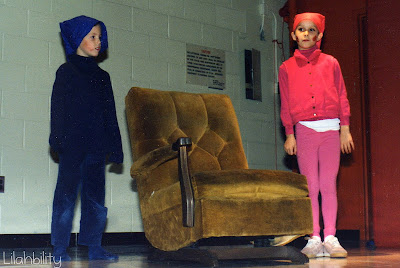 5.  Fast forward through the awkward teen years, and we arrive at this still slightly awkard Christmas picture, which must have been taken in 2000, to the best of my recollection.  Normally I am a brunette and my sister is a blonde, but we decided to switch hair colours on this particular occasion. 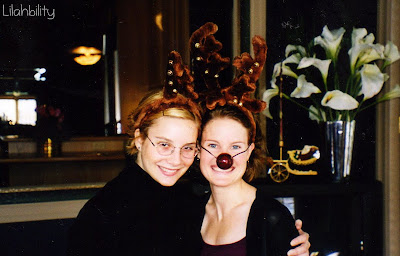 6.  This picture was taken two days before Christmas of 2008, when I was exactly 14 weeks pregnant with the Lilahbility. 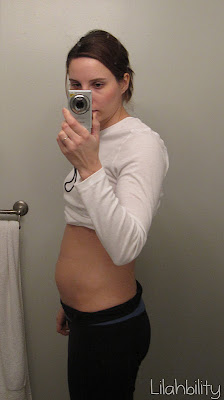 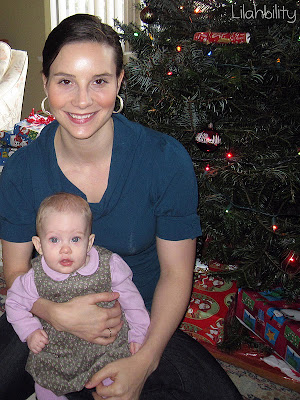 8.  Last Christmas, Lilah was a little less than 18 months old.  That's when it really started to get fun. 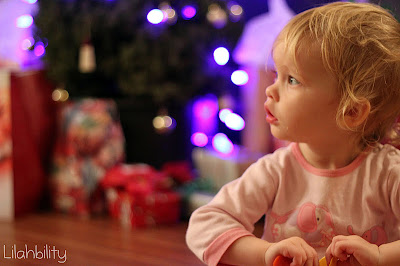 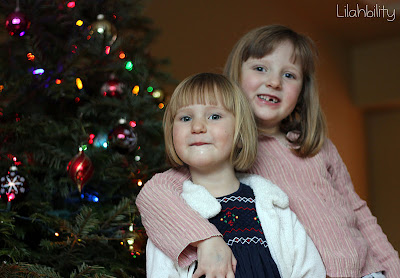 10.  And last but not least, it just so happens that I took my favourite photo of all time on Christmas Day, 2010.  I've been getting just a little mileage out if it, as you may be able to tell from my header. 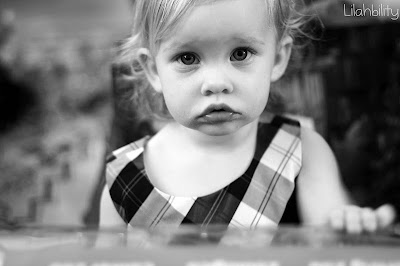 Well I don't know about you, but going through old photos sure put me in the Christmas spirit!  Now go treat yourself to an eggnog latte and head over to Stasha's to check out some other Monday Listicles.

In case you haven't noticed, fall is on its way out and winter is quickly closing in (at least in Vancouver, that is).  The Shades of Autumn Photo Challenge helped me appreciate fall for its gorgeous colours, and made me search for new things to photograph.  Lilah is a lovely subject, but it's nice if I have a few pictures of other things, too!  Here are my favourites from each colour: 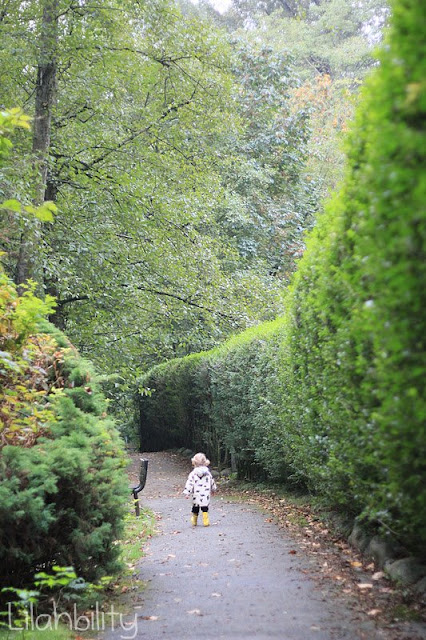 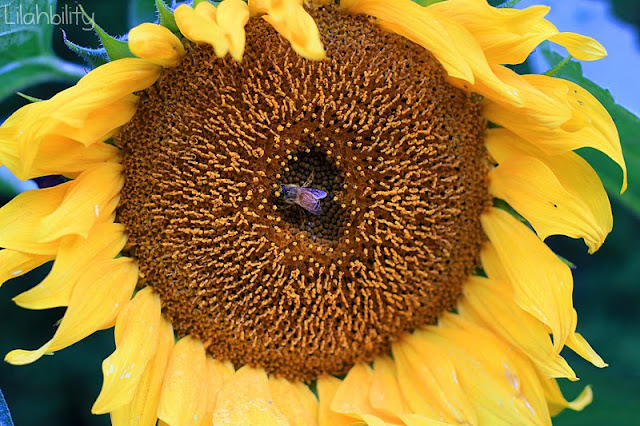 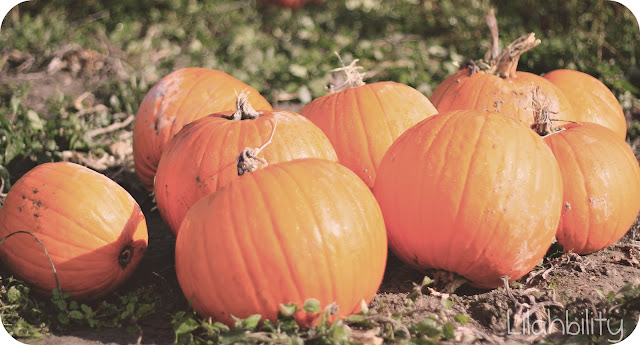 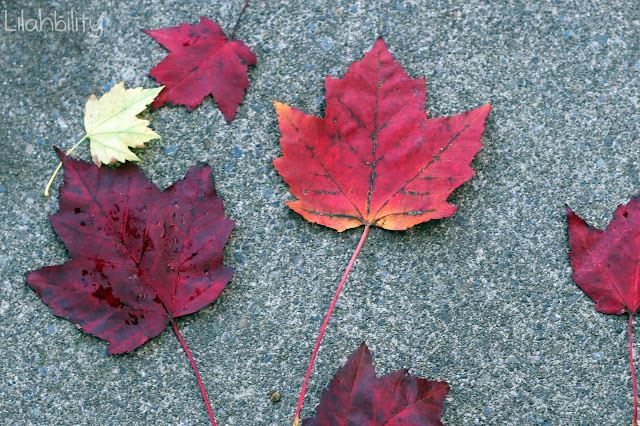 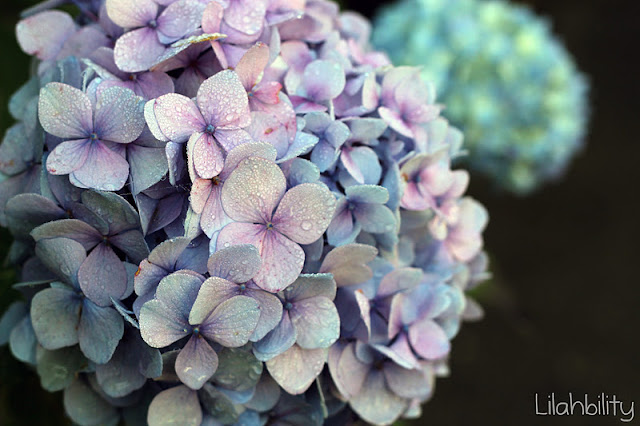 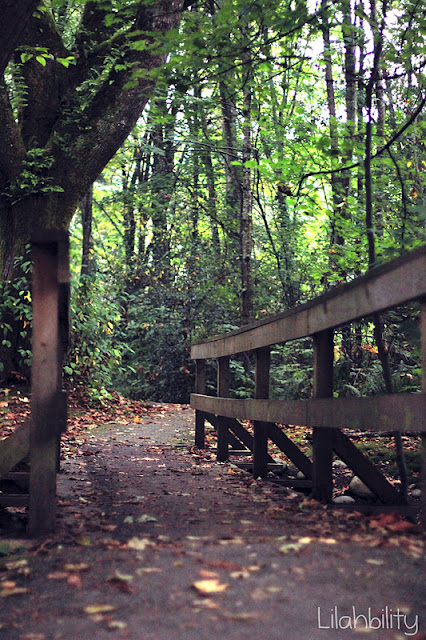 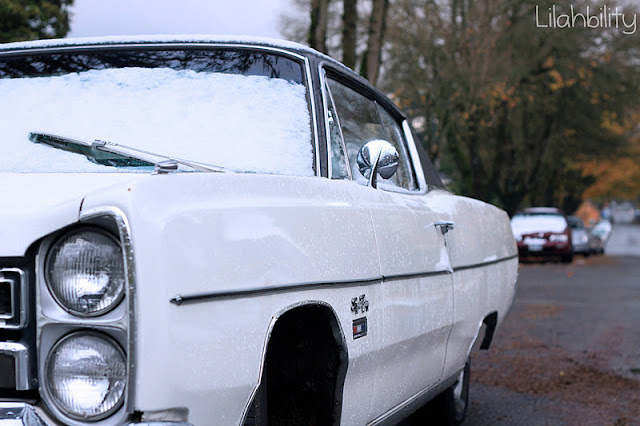 Did you have as colourful a fall as we did?

The Man of the House

Blerg.  Is it really almost Monday again???  Well, the good thing about that is... yep, you guessed it, Monday Listicles.  This week Jen chose the topic - 10 reasons why you do or do not want to have more children.  Which is a great topic, and I'll tell you all about it another day.  But today... today I honour my wonderful Hubs on his 33rd birthday by giving you a list of you just ten of the many things that make him so special.

1.  He is no stranger to cooking and cleaning.  He does the lion's share of that around our house, and he is way better at it (well, the cooking, at least) than I am.

2.  He puts up with my mood swings and neuroses, both of which are plentiful.

3.  He married me even though I once separated his shoulder in a drunken misuse of my ninja skills.

4.  He is generous and giving; thoughtful and kind.

5.  He is a patient and loving father.

6.  He carries Lilah when my arms feel like they are going to fall off.

7.  He can chop an entire pineapple in under 2 minutes.

8.  He plays with my hair when I can't fall asleep. 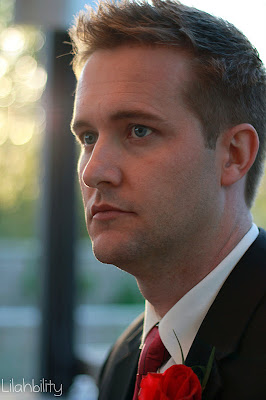 Happy birthday to an incredible husband and father!
﻿

Last weekend when were were in Whistler, we experienced our first snow of the season. 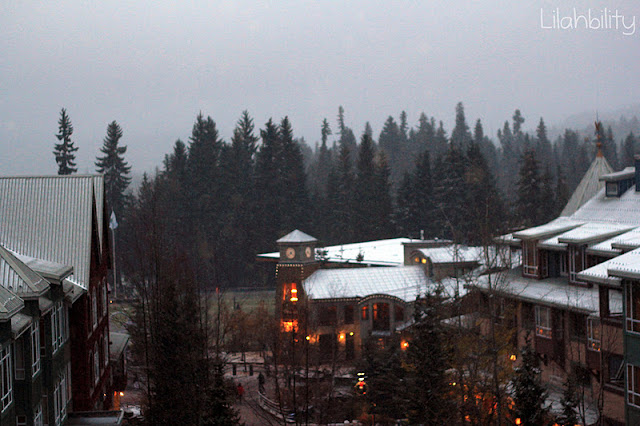 Vancouver's snow wasn't far behind, showing itself on Friday.  (Along with sleet, hail, and rain.  Because we Vancouverites like to have plenty of options.) 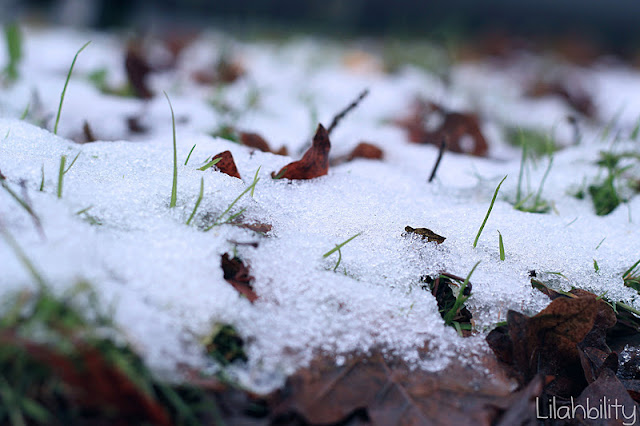 It was pretty minimal as snow goes, but it did collect enough for me to get a few shots for this week's photo challenge.  Even so, I found myself casting around for subjects.

Which is when I found this cool old car parked near my home. 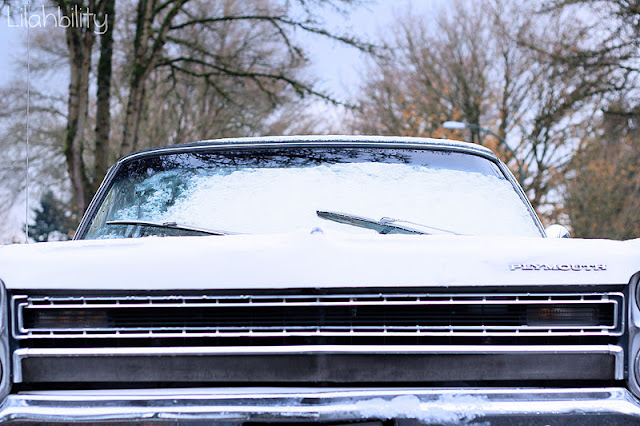 I know exactly zilch about cars, and even less about how to photograph them, but I sure had fun trying!

Learning to Embrace the Quirks

We spend so much time thinking about how and what to teach our children, but it's the rarer occasion when we step back and think about what they can teach us.

Each stage in Lilah's development has come complete with its own lessons.  From the moment she was conceived, this little being has had so much to teach me.

As she grew inside of me, the lessons were to have faith in what was meant to be and to trust my body.  After experiencing a miscarriage in the first trimester of my first pregnancy just a few month before Lilah was conceived, this lesson was not an easy one, but it was so necessary.

During the newborn stage, I learned (quite abruptly) that it was no longer all about me.  In fact, it was very much not about me.  I learned to give every ounce of myself to another being and to be rewarded simply by the giving, and perhaps the occasional gummy smile.

When she started toddling, I learned to stay near, to keep her safe and protect her from harm, but also that even if I could catch her every time she fell, I probably shouldn't.  I learned that falling down is not only inevitable, but also necessary for us to grow and change.

Now that she is deep in the throes of two, one of the lessons, as I see it, is to embrace the quirks.  A two-year-old, even a shy one like mine, dances like no one is watching, lives in the moment, follows her impulses, says what is on her mind, and lets the quirks shine through, with no concerns about what others might think of her. 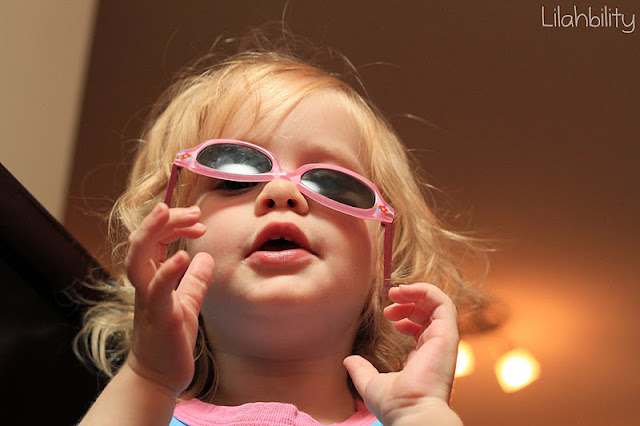 This is a quality I could really stand to absorb.  Since it doesn't seem to happen simply through osmosis, it is a conscious decision I must make to embrace my own quirks.  I used to curse my lop-sided smile whenever I saw a picture of myself.  But now I do my best to squelch that little voice that tries to tell me I look dopey and opt for the loud, uninhibited two-year-old voice that says, "Who cares? I am happy right now."

My lop-sided smile is my authentic smile; the smile that is most connected to my two-year-old, living-in-the-moment, impulse-following, quirky self.  Which makes it far more attractive than anything studied or posed.

And so I choose to receive with open arms the lesson that my tiny one is teaching me and embrace my quirks for what they are: the things that make me human, imperfect, likeable, interesting, and beautiful.

Buzz on over to Bruna's to check out this new meme!
Posted by Amanda at 10:13 AM 14 comments

Wordless Wednesday: A Girl and Her Purse

Nothing comes between a girl and her purse...﻿ 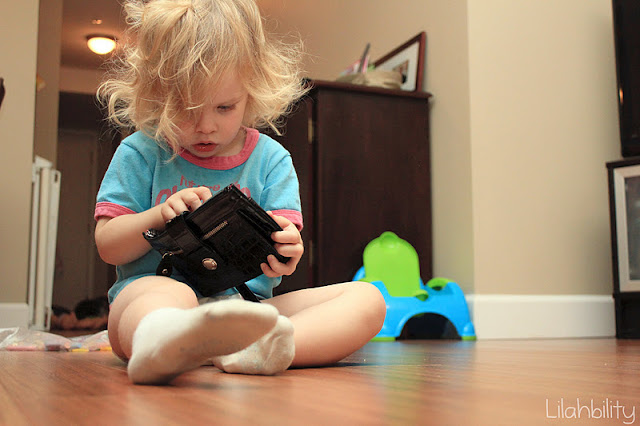