Henry's early solids included very soft-steamed or soft-cooked veggies, such as broccoli, yams, carrots, and spinach, and naturally soft fruits like very ripe pears, bananas, and melon.  These were almost always part of a family meal we were eating anyway. Whenever possible, we tried to cut them into manageable (long and thin) pieces for him to grasp with his fist.

For example, I eat oatmeal for breakfast almost every morning, so Henry was also introduced to it early on.  You can easily make it into a finger food by cooling it to room temperature and cutting it into strips.  It holds up surprisingly well, but is also fun for babies to squish and play with.

Which brings me to my next point.  Food is very much about play and discovery in the early stages.  If you're going to go the BLW route, you have to be okay with that.  The rule of thumb is: food before one is just for fun.  (However, I think Henry may have missed that memo, because he has always eaten as if it was his job.)

I did my best not to worry about how much he was eating, but I have to admit, at times it was hard to sit back and let him take the reins.  I worried when he didn't eat much that it would affect his sleep (which wasn't great until he was about 9 months anyway, so who knows?) and when he ate tons I worried that he would spend less time nursing (which happens as they get more efficient anyway) or that he would become constipated.  Clearly, I'm a worrier, especially when it comes to my kids' food intake.  But it all seems to work out in the end, and BLW was an excellent exercise in relinquishing control.  A metaphor for many parts of my parenting journey.

We gradually increased how many solid meals we offered in a day, starting with dinner, then breakfast, and then finally lunch.  I didn't keep a food journal, so all of this is from memory, but if I recall correctly, I think he was on three meals a day by around nine months.  (This was following his lead.  He would literally get angry when we ate meals without offering him some, too.)  We also followed doctors' and nutritionists' guidelines of only introducing one new food every 5 days or so, watching for allergic reactions or sensitivities.

I was quite surprised at how quickly his fine motor skills caught up to his appetite.  He was extremely motivated and quickly learned to pick up small bits of food, such as kamut puffs and rice puffs.  This could simply be a difference between my two kids, but I noticed his fine motor skills improving much more quickly at this stage than Lilah's did, and my feeling is this could be partly due to BLW.

﻿
But What About Choking?

I was cautioned by a few friends early on about choking, but never experienced any problems with this with Henry.  Now, it is important to differentiate between gagging and actual choking.  Early on, he gagged fairly regularly, but I could see that it only his body's natural way of moving chunks of food he couldn't swallow from the back of his mouth to the front.  Lilah gagged with spoon feeding early on, too, so I knew this was not unique to BLW. And because we waited until he was sitting well on his own, we were confident that his system could handle it.  And, it almost goes without saying (but I'll say it anyway) that we watched him like a hawk anytime there was food anywhere near him.  If you are considering starting BLW with your own child but are concerned about choking, there are plenty of clips on YouTube to watch in order to prepare yourself.  Here's a video a friend emailed me when I was preparing to start BLW with Henry:


﻿
Isn't she adorable?  That was too much broccoli for her little mouth, but her physiology took care of it.  And you can see she isn't exactly traumatized by the experience - was that a little yawn between gags?  She was about six and a half months at the time of this video, and had no teeth.

Henry was rather a late bloomer in the teeth department, but that didn't stop him for a second.  His first two teeth appeared closer to nine months, and, at almost 13 months, he is just now working on his third and fourth.  He still manages to eat many different textures of food like a champ.

Now, with all of that said, I supposed we weren't super hard-core with the BLW, since we did (and still do, sometimes) use packaged purees for when we were eating meals out and weren't sure if there were going to be any reasonable options for a baby.  These pouches 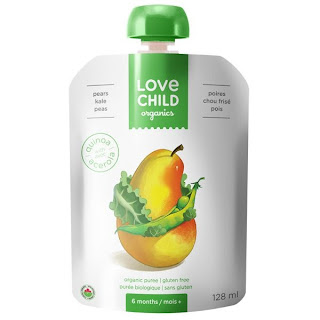 are incredibly useful.  They didn't have them when Lilah was a baby, and I was so happy to discover them this time around.  No more glass jars in my diaper bag!  I started by spoon feeding him the contents, but now he just grabs the package out of my hands and slurps it up in two seconds flat!  Many companies make pouches like these, but these particular ones are organic and from a company that was started in BC, so of course I am partial to them.  They are now available throughout Canada.

As I've said, BLW worked extremely well for both Henry and our family this time around.  It was easier, more relaxing, more fun, and felt far more natural than the spoon-feeding of fortified cereals and purees I did with big sister Lilah when she was a baby.  My two kids are different in just about every way possible, so who's to say if it would have worked as well for her as it did for Henry?  But in any case, I am very pleased we went the BLW route with Henry.

However you choose to feed your baby, happy eating!

Would you, or have you, tried BLW?  Let me know what you think in the comments!
Posted by Amanda at 8:22 PM