Wednesday of Few Words: A Toddler's First Encounter with the White Stuff

﻿The weather forecast for Friday night called for unusually cold temperatures and snow.  Snow!  On the 20th of November in Vancouver! Of course, having a Master's Degree in Speech-Language Pathology and zero knowledge of meteorology, I felt more than qualified to say, "Pshaw!  I'll believe it when I see it!"  (Yes, I'm unbelievably cool - I say things like "pshaw.")  This of course meant that I neglected to charge the battery of our super duper awesome camera and had only the little point-and-shoot with which to document Lilah's reaction to the surprisingly thick blanket of snow we woke up to on Saturday morning. 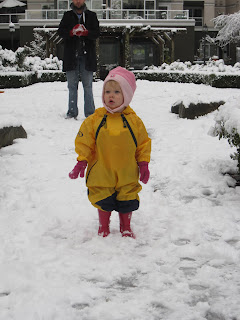 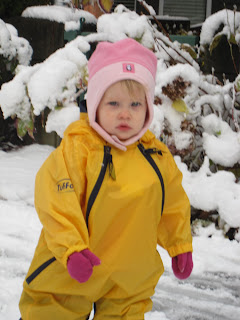 She doesn't own winter boots or a snowsuit yet because, you know, her mom knows better than those silly meteorologists.  We never get snow before Christmas in Vancouver!  So it was rain boots and a muddy buddy with lots of layers underneath for our li'l Lilahbility.
﻿﻿﻿﻿﻿
There's a rumour going around (probably started by those gossipy busybody meteorologists) that this is going to be an unusually cold ﻿and snowy winter in Vancouver.  I might just be starting to buy into the hype!
Posted by Amanda at 6:00 AM