In honour of Lilah's birthday, here are 12 random thoughts, one for each month she has graced us with her magnificent presence. (Hey, so I'm a day late, but cut me some slack, okay? I had a big old first birthday party to throw yesterday!)

1. Why do I always have to sneeze when I pluck my eyebrows?

2. We had some warmer weather last week (finally, but apparently it was just a teaser), and I let Lilah hang out in just her diaper. She disappeared into the bedroom and all I heard was silence, which always means trouble. Five seconds later, she came around the corner butt naked, swinging her diaper around over her head. I kid you not.

3. Our cat caught a mouse and kindly brought it in to the house for us. I guess it's his way of paying us back for providing him with food, shelter, and the occasional petting session over the past six years. Unfortunately, it was still alive and the Hubs showed that he truly is the man of the house by disposing of it. There may or may not have been a few girly shrieks along the way.

4. Apparently no one listens when you request no presents at a child' birthday party. We may have to buy a bigger house just to house all her toys, but Lilah is pleased as punch with her gifts!

5. I think I'm still in denial about my return to work tomorrow. I thought I'd have a serious case of the "Sunday blues," but I'm just trying not to think about it. Oh, no, wait - it's start to hit me... NOW. Just a second while I have a massive anxiety attack.

6. Okay, I'm back. I really can't believe I'm now the mother of a one-year-old. Everyone says it and it's such a cliche, but seriously, where does the time go?

7. "I Am Legend" was on TV last night. Somebody tell me, when did Will Smith get so ripped? I adore him, and I think he was brilliant in "Six Degrees of Separation" and "The Pursuit of Happyness," but he will always be the Fresh Prince of Belair to me. I guess no matter how many serious roles you take on, you'll never be able to shake a reputation like that.

8. Teaching Lilah the sign for "milk" might have been a mistake. She's now asking to nurse about 17 times a day, whether she actually wants it or not.

10. So one year and one day later, and I still have yet to see any sign of that old hag everyone loves to hate, Aunt Flo. That means it's been almost two years since she's shown up around these parts. May she continue to stay far, far away!

11. I'm one of those obnoxious parents who posts hundreds upon hundreds of nearly identical photos of my child on Facebook. Because I can.

12. On a totally unrelated note, can I interest you in a photo of my insanely cute one-year-old? (Okay, not really a random thought, but I figured you'd be distracted by her dazzling smile, squishable cheeks, sparkling blue eyes, and porcelain complexion.) 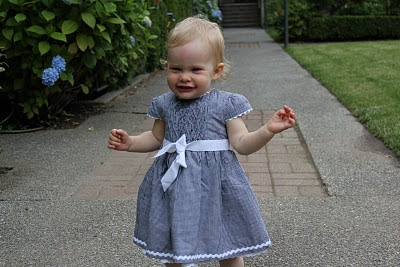