Lilah is an open book.  As a toddler, her motivations and thoughts can be read on her face, through her body language, and through her short, telegraph-style sentences.  She isn't yet really capable of lying, so when I ask her if she's going to throw her spoon again if I give it back to her, I'm never surprised when the answer turns out to be "yes."  And never is she more transparent than when she first wakes up in the morning.  The first thing she says when I go get her from her crib is very revealing as to what's on her mind at any given time.

Here are some of the things she has said to me right after waking up:

When we were in Harrison sharing a rental house with a bazillion family members and their dogs: "Doggie no get Lilah?" (I'm just going on instinct here, but I think she may be just a teeny bit afraid of dogs, what do you think?)


The next morning during the same weekend in Harrison, articulated with perfect grammar and diction:  "People are sleeping."  (Actually, Lilah, you're the last to wake up.  The other kids woke the whole house up at an ungodly hour.  Thanks for showing off your super sleeping skills.  But on the other hand, now no one's going to believe me when I tell them you're usually an early riser - there goes mommy's sympathy vote!) 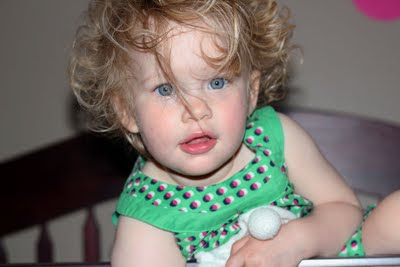 Occasionally we get an "Aaaadddddie" (her BFF's name) or Addie's parents' names thrown into the mix. (As if she'd rather be waking up in their home than ours...)
Lately it's often, "Jump, jump, JUMP!" (Because that is the skill she is working hard on mastering these days.)

And then of course there's the simple yet eloquently stated "Whoooaaa."  (Like, Dude, that was a trippy dream!")

But of course, the most common first thing Lilah says in he morning is "Mamaaaaa!" or sometimes, "Maaaamaaa, ah are you?"  Because, let's face it, to her, I'm pretty much the best thing going 'round these parts.  Can you really blame her?
Posted by Amanda at 8:46 PM