Now that things are going pretty smoothly and the Hubs and I are patting ourselves on the back for having things relatively together (toothbrush debaucle and stomach flu aside), it's time to up the ante. In the interest of being green and saving green, we've decided to change one habit each month. A year from now, we hope to be living an altogether greener lifestyle. I'd like to be able to say that we did our part to leave this planet in decent shape for our children and grandchildren. Having a child really does change your perspective on these things. Besides, I've realized we need to compensate for Lilah's decidedly un-green habits, like wasting food and ripping large amounts of toilet paper into tiny shreds.

Last month, the Hubs (finally!) bought a really good, really large travel mug for his daily gallon of coffee so that he can feel better about his Starbucks addiction. It's a tiny change, but once you implement these changes, your perspecive shifts, and they become the new norm. So much so that the Hubs now gets a guilt attack if he shows up at Starbucks having forgotten his giant travel mug. Green is the new black, and that's how he takes his coffee these days. (Thank-you, ladies and gentlemen, I'll be here all week!)

Other changes we've made recently: the Hubs is taking a stab at growing his own herbs (I think I've mentioned that he's the real chef in this household, and chefs do love their seasonings!), and we've acquired some mesh bags to use when shopping for produce. Which we intend to do as often as possible at our local farmer's market.

The project for June? Making our own laundry detergent! We have a high-efficiency front load washer, so we need to use liquid detergent, which requires a few more steps than home-made powdered detergent, but it was sort of fun and satisfying in a Little House on the Prairie type of way. I used this recipe to make liquid detergent. I've washed a few loads in it and so far, I'm reasonably happy with the results. The detergent is definitely low-sudsing, but I'm so conditioned to expect lots of suds in the washer window that I'm slightly nervous that the clothes aren't getting as clean as they do with store-bought detergent. Everything is coming out looking clean, though. I went with the basic recipe for a first pass, and I may try adding a few drops of essential oil next time, just to get some kind of "clean" scent. The other thing is, the liquid detergent gels, so it needs to be stirred before each time you use it. On the plus side, this detergent is gentle enough to be used on our clothes and household items as well as Lilah's clothes and bedding. 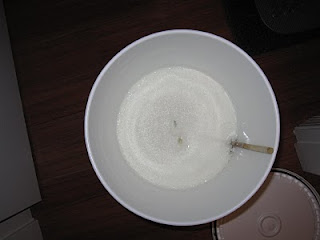 My brand new bucket filled with home-made liquid laundry detergent!
This new habit will defintely save us money over the long run as well. We had to buy a painter's bucket with a lid specifically for the purpose of making and storing the detergent, but that's a one-time cost. The ingredients cost about $15 all together (at the most!), and that's enough to make several batches of detergent. Over a year, this will save us a whole lotta dough.

So I'm a convert. I'd say this is a really good start to our new green outlook on life!