Wow! Time flies! I can't believe it's been a week since I last posted an update.

Lilah's had lots of firsts this past week, which I guess is why things have been so busy. A couple of nights ago, she started crawling "for real" - on her hands and knees. She only goes a short distance this way and then flattens out onto her tummy and reverts to her commando crawl, but it's a start. It also means she is no longer content to be immobile in her play pen or exersaucer. This kid wants to be moving ALL the time!

She's also started cruising around her play pen and a little on the furniture, although she does topple over quite often. That poor (large!) head of hers is going to be taking quite the beating from now on, I fear!

Her second and third pairs of teeth have started to make an appearance as well. She's a teething machine! (And she's already started grinding the teeth she has - ugh!)

So between the constant movement and the teething, Mommy is T.I.R.E.D.!!!! I'm looking forward to having some time off to go to an Olympic event or two this week while Daddy, armed with several ounces of expressed milk, takes over for a few consecutive hours! 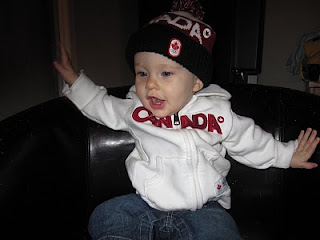